“Art is timeless” is the motto behind the new challenge faced by Tornabuoni Arte in the fascinating world of antiquities. The “Arte Antica” gallery, which opened in 2006, is located in a prestigious 14th century palace along the Via Maggio, the most famous street in Florence’s antiques scene. It exhibits a rich collection of art works, including paintings, sculptures, furniture items and objects originating from the Middle Ages until the 19th century.
All the objects we propose were studied by eminent scholars in order to guarantee their authenticity and their descriptions are published every year in an illustrated catalogue of the collection.
One of the most particular features of the Tornabuoni Arte “Arte Antica” gallery is the suggestive small room covered in black velvet, containing the 14th and 15th century paintings, the so-called “fondi oro”. Within the penumbra, similar to that of the ancient medieval churches, the gilt backgrounds of the paintings shines with all their mysticism.
In 2007 the exhibiting space was conspicuously increased and an exhibition by the title Dai Fondi Oro a Lucio Fontana: arte tout court took place. 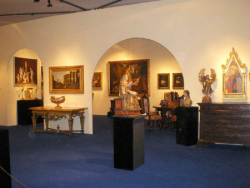